Thanks for joining us today, Garrett! Let’s jump right into Question #1. Tell us about your business and what you do as a “money coach”?

Garrett: I am the founder of Be Awesome Not Broke, where I work as a financial coach and help people reach financial freedom while living a freakin’ awesome life along the way. I work virtually, which means that I work with people all around the country. I really focus on people who have an idea of what they want out of life and who make decent money, but who struggle to be able to put their money towards the things that really matter, and therefore don’t have much traction towards their goals. A lot of times they feel stuck, behind, and like they aren’t where they want to be or should be.

I really try to help people get a clear sense of what is most important to them by helping them understand what money is coming in, what money is going out, and how that relates to the things that matter most to them. Then we put together a step-by-step plan to help them make sure that their money is going toward the things that matter. This is more than just paying off debt and starting to save. For example, if they want to quit their job in a year and take a cross-country trip with their kids, they can do that. If they want to travel more internationally, they can do that. If they want to go back to school, it’s about figuring out how to help them do that. It’s not just about putting together a budget, but it’s really about helping them get clarity on what their goals are and what’s most important to them and really helping them direct their money towards those things.

That definitely sounds like a much-needed service. On to Question #2. Health insurance can be as expensive as a mortgage payment. How do you help people navigate that?

Garrett: I work about half of the time with people who have a regular 9-to-5 job, and the other half with people who employ themselves. For those who have W-2 jobs who are working for someone else, most of the time their health insurance is taken care of through their employer, and so there isn’t too much to do there—though sometimes it’s helpful to have them get additional coverage.

But for those who are self-employed, I partner with insurance specialists who can help them navigate what their options are. While I am an expert in helping people put their money towards what really matters, I’m not an expert in health insurance. I know enough to be slightly dangerous, but to make sure people are taken care of, I forward them over to a professional like Susan Polk [smiles…].

Well, we certainly do appreciate that and love helping people get the most out of their insurance dollars. Question #3: what are your recommendations concerning the use of government subsidies such as Medicare or “Obamacare” to purchase health insurance?

Garrett: Again, you would be the expert here, but from what I understand, the government subsidies are available to people, at least on the open marketplace, who qualify based on income. So for those who qualify, I highly recommend they look into that because it’s free help from the government to help pay for health insurance, which, again, can be really expensive when you’re on your own. So if someone has a lower income and qualifies for help, my advice is to go do it! There aren’t many times you can get free money, so if you’re looking for health insurance and you get someone to help pay for it, I would recommend that.

Question #4: how much life insurance would you recommend that people carry, and how does that relate to making good financial choices?

Garrett: It really is situational. Life insurance is to make sure the people who depend on you are not impacted in the case of your passing. So, for example, I work with a lot of single people who don’t have any children, and I don’t recommend that they get life insurance because there’s no one who’s dependent on them. If I don’t have any children, sure, I could take out a life insurance policy and have my sister be the beneficiary, but she’s in New York and has a great career there and doesn’t need that.

But when someone has people who are dependent on them, whether it’s children or parents, I send them over to someone who can really help them with life insurance. I’m can give people a brief overview of what life insurance is and the difference between term and whole-life, and I can help give them an idea of what they might need, but again, I’m not super qualified for that. That’s something they really need expert help with—and they do need it if they have dependents. 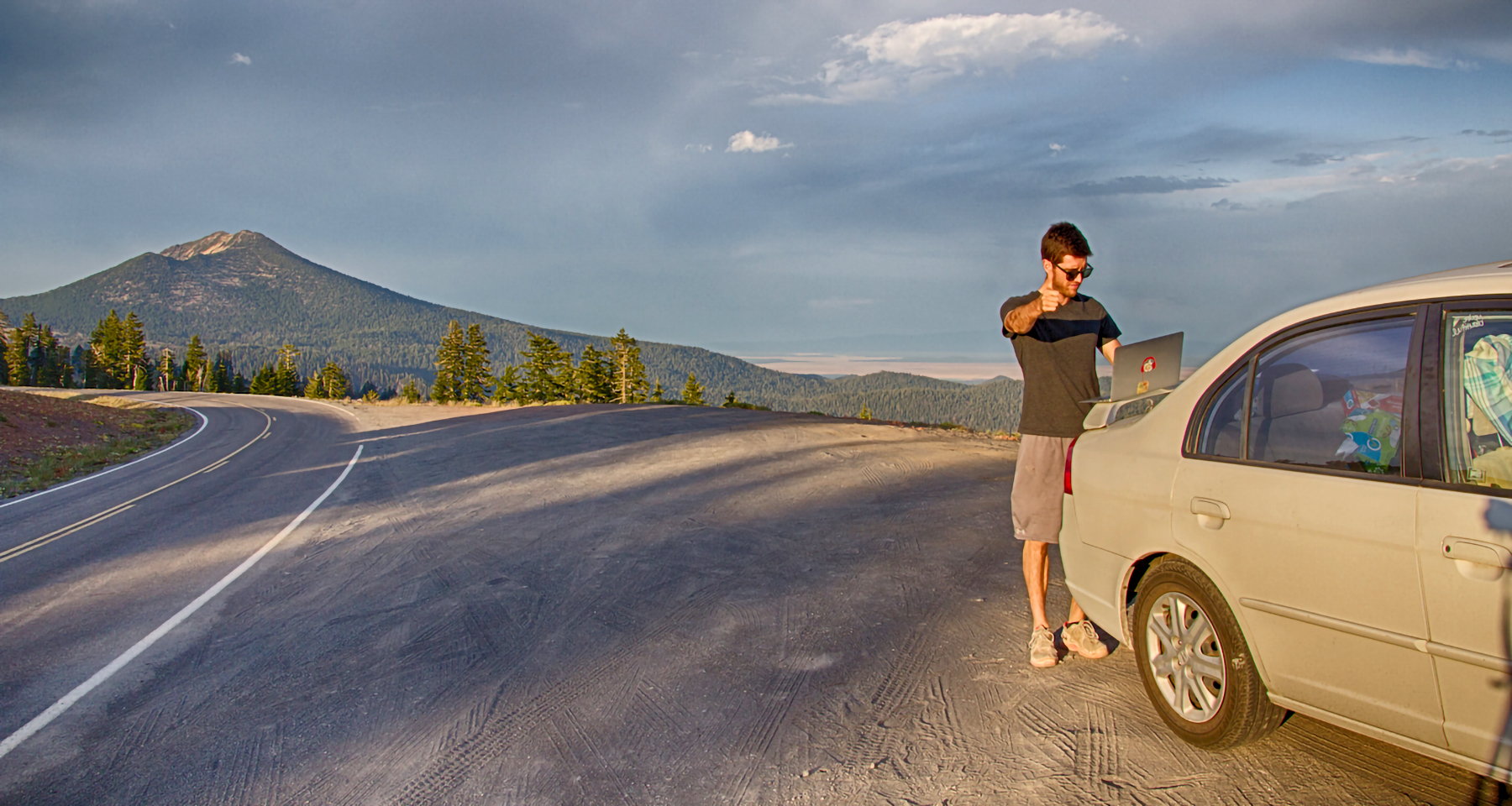 Garrett working while on a road trip to Crater Lake in 2016. “Aligning your money with your goals allows you to spend more time doing the things that matter most to you,” Garrett explains. “Money doesn’t have to be a roadblock that keeps you from doing the things you love.”


So you really are approaching it from the standpoint of making the best financial decisions, aren’t you? That’s interesting, because most people probably operate that way to a degree, but they don’t typically think about it in exactly those terms.

Garrett: Absolutely. Insurance is important to have, but what that means exactly depends so much on where you’re at in life and what kind of coverage you actually need.

We agree completely. Moving on to Question #5. Disability insurance and working professionals—what are your thoughts and advice?

Garrett: I think that for most people, disability insurance is a pretty good idea. I think the statistic is something like 80% of Americans live paycheck to paycheck. So if you lose your job temporarily or if you become disabled and lose your ability to work, you’re kind of screwed, and most people are going to be in a pretty tough spot.

Insurance is there to help protect you against potential downsides, and I think it’s a surprisingly high number of people who go on either short- or long-term disability at least once in their lifetime. [Editor’s note: More than half of all Americans will need long-term care at some point during their lifetime (source: Morningstar).] Most people don’t think it will happen to them, but it happens much more frequently than they would think. It’s important that they protect their most important asset, which is themselves and their ability to work—which is why disability insurance is so important.

So true. Unfortunately, we see a lot of people who aren’t prepared and who are too late to respond when life does happen. But that raises another question (which is question #6, so it’s technically a bonus). Would you say that insurance—whether life, health, disability, etc.—is one of the building blocks of financial wisdom, or is it a kind of an add-on if you can afford to think about it? Where would you place it?

Garrett: It’s definitely one of the essentials, though there is a caveat: It’s essential and important to only get the amount of coverage that you need. For example, you don’t need a million-dollar life insurance policy if you’re single. There are some types of insurance that, based on your situation, you won’t need. Either you won’t need it at all, or you won’t need a very large amount.

Again, though, insurance is really protecting you against potential downsides. Humans are funny in that we think that bad things don’t happen to us, but they do. So usually when bad things happen, we haven’t prepared for them so we end up losing everything and hurting those around us.

But that’s what insurance is about. It’s a way to hedge against the potential risk that we often don’t think about. And if you get the coverage that’s right for your particular situation, it’s not usually insanely expensive.

So yes, insurance is a really important investment for you to make, because without it you’re definitely going to be in a much worse situation.

That’s excellent, Garrett. Is there anything else you’d like to leave people with before we wrap it up?

Garrett: Sure. Like I said at the beginning, I help people who feel like money is a roadblock that keeps them from doing what they want in life. You can learn more about that at beawesomenotbroke.com, where you can find videos, articles, and all kinds of helpful resources, including an awesome podcast that I do with Sarah Li Cain called Beyond the Dollar, where we have raw conversations about everything relating to life and money.

Perfect, that sounds great. Thank you so much for your time today, Garrett.

Are you getting the most out of your insurance dollards? Schedule a FREE consultation today.

For 40 years, we’ve been helping San Luis Obispo make the best insurance decisions. Contact us today for a FREE consultation.

Get the Most Out of Your Insurance Dollars.

Since 1988, we’ve been helping people just like you find the perfect coverage option for their needs. Schedule a FREE consultation by calling us at (805) 544-6454, or click the button to send us a message, and get peace of mind today.